A Brief History of Excelsior Motorcycles

The company chose 'Excelsior' as their trademark in 1874.

In 1896, the first Excelsior motorcycle was built featuring a single cylinder Minerva engine from Belgium fitted into one their own bicycles.
It is claimed that this was the first motorcycle sold in Britain.

From around 1900, Bayliss, Thomas & Co. were well known for their involvement in motorcycle racing.
In 1910, the company became known as The Excelsior Motor Company Co Ltd.

Shortly after World War I, the company was taken over by R.Walker & Son and motorcycle production was transferred to the Walker's site at Kings Road, Tyseley, Birmingham.

In the depression years of the early 1930s, Excelsior responded to their customers by providing small machines that had low running costs, often powered by Villiers engines.

In 1934, Excelsior introduced the Manxman, probably their most famous model.
Designed by Eric Walker and H.J. Hatch, it was initially a single cylinder overhead camshaft machine of 249cc. The Manxman was later available with either a 348cc or 498cc engine and was produced up until the breakout of World War II.

Just before the war, Excelsior had been producing a low cost 98cc autocycle known as the Auto-byk.

From 1940, Excelsior produced the 'Welbike' which was a small collapsible motorcycle used by paratroopers in the war.
The production of civilian motorcycles resumed in 1946, but this was limited to small lightweight machines such as the 125cc Universal. The Auto-byk was also re-introduced in 1946.

There had been plans to reintroduce the Manxman after the war; however these plans did not come to fruition.
Excelsior only produced two strokes after the war, although it is understood that, in the mid 1950s, there was an experimental 250cc two cylinder four stroke that never went further than the development stage.

A popular post war model was the Talisman, which used Excelsior's own 243cc two cylinder two stroke engine and four speed gearbox. A low cost 98cc commuter known as the Consort was also a popular machine.

In 1957, Excelsior introduced the 'Skutabyke', which was basically a Consort motorcycle with body panels.

Eric Walker died in the late 1950s. Shortly after Eric's death, the company manufactured a range of small outboard engines and marine gearboxes.

In the early 1960s, the 147cc Monarch scooter was introduced; however this could not compete with the Italian scooters available at that time.
This model was withdrawn soon after. In 1962, there was a 500cc three cylinder two stroke engine that had been developed for the Berkeley sidecar outfit. This engine was not produced for long.

By 1964, Excelsior was only producing two models, the 98cc Consort and the 150cc Universal. These could be bought in kit form to save paying purchase tax.

By 1965, Excelsior was in financial difficulty and they were taken over by Britax, the motor car accessory company. Motorcycle production stopped and Britax continued making car accessories at the original Excelsior factory in Tyseley.

The Manxman was a motorcycle designed and built by H. J. Hatch and Eric Walker of the Excelsior Motor Company in Tyseley,Birmingham. Although it never won the Isle of Man TT, the Manxman was a very popular and reliable motorcycle which was successful in international racing and theManx Grand Prix.Production was halted byWorld War II and did not resume. 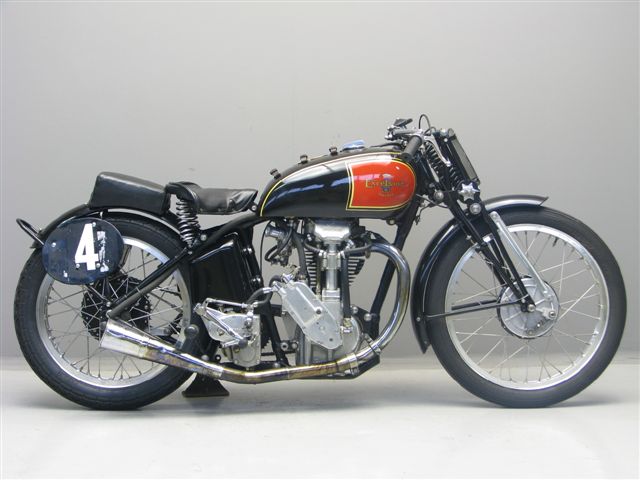 The Excelsior Motor Company did not make engines before World War II so Excelsior's Eric Walker worked in partnership with Blackburne's Ike Hatch, building on ideas developed by Rudge motorcycles on four valve engines to develop an entirely new twin camshaft design with pushrod operated valves that they called the 'mechanical marvel'. This was planned as the power unit for a new motorcycle to be called the Marvel and the prototype won the 1933 lightweight TT.

It was decided however, that this engine was too complicated for mass production so the team developed a simpler two valve single overhead cam configuration in 250cc, 350 and 500cc capacities which were all marketed as the Manxman and had the Isle of Man emblem on the engine casing and a bronze cylinder head. Although riders found it heavy, the Manxman handled well and was very reliable - if a bit over engineered. 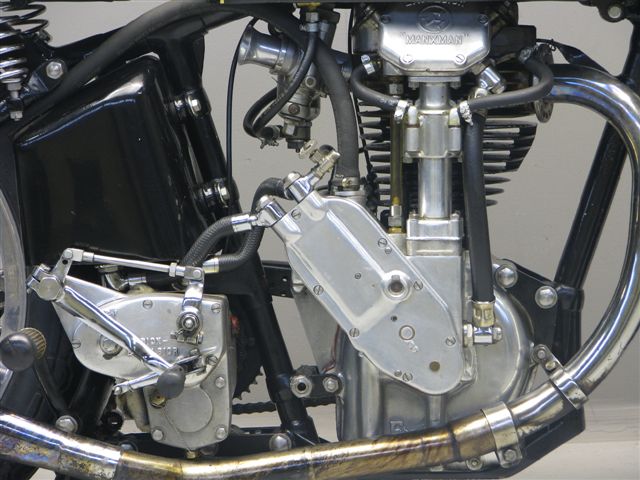 Road and race versions were produced but the 500 was only ever marketed as a sports roadster. In 1936 a four valve version was developed and won second place in the 1936 and 1937 Lightweight TT races. The Manxman also became a popular choice for the independent TT racers or privateers who went on to achieve many wins until World War II stopped them racing  In 1937 the company developed a shorter-stroke 250 engine and an aluminium-alloy cylinder head with right-hand exhaust port.