The TR6 Trophy is a motorcycle that was made by Triumph, in Meriden, from 1956 to 1973, when it was replaced by the five-speed 750 cc Triumph Tiger TR7V. During this time it was a successful model, particularly in the US. The competition variant, popularly known as the "desert sled", won numerous competitions throughout the late 1950s and 1960s. The bike's appearance in The Great Escape and Steve McQueen's fondness for the model are well known.

The genesis of the model came with the introduction of the 650 cc Thunderbird Model in 1950. This was released to meet the demand for higher capacity motorcycles, particularly from the United States, Triumph's largest export market. In 1954 the T110 model was introduced, a higher performance version of the Thunderbird. The success of these models and the 500 cc TR5 Trophy led to the creation of a 650 cc TR6 Trophy model. The TR6 was developed and produced specifically for the US market, in particular, California desert racing.

The model was introduced in 1956 and named the TR6 Trophy-bird, borrowing its name from the Thunderbird model.The model used the same engine as the T110 but with the new "Delta" alloy cylinder head. The cast iron barrel was retained but painted silver. The engine used 8.5:1 compression ratio and developed 42 bhp. The power delivery made the mount ideal for off-road competition, for which the model is well known. The bike sported a 'siamese' (two-into-one) exhaust system and a 7-inch front brake.  Another feature taken from the TR5 was the quick detachable headlamp, which was ideal for bikes ridden to competitive events and back again. This used a multipin connector which plugged into the bottom of the headlamp shell.

For 1957 the front brake was enlarged to 8 inches. The TR6 was now fitted with a Lucas Red Label Competition Magneto as standard.This was the first year of the "Harmonica" tank Badge. For the 1959 model year the Trophy was offered in two variants the TR6/A and TR6/B. The TR6/A was the roadster model with low pipes and the TR6/B was the high-piped street-scrambler. After Edward Turner, the fabled Triumph designer, witnessed the death of a young rider on a TR6, at the 1960 Big Bear Run, due to frame failure it immediately received a stronger steering head. For 1961 the "Trophy-Bird" name was replaced with simply "Trophy". The home model was named the TR6 whereas the US export models were named TR6C for the competition model and TR6R for the road model. Ruby Red and Silver was used for all models. For 1962 the US models were renamed TR6SR and TR6SC.Introduced in 1962 and offered through 1966 was the TR6SS model which sported a two-into-one exhaust, but was otherwise similar to the road going model. The TR6SS used the cheaper K2F magneto rather than the competition K2FC used previously.

Like the other 650 cc models, the Trophy gained unit construction in 1963. This traded some smoothness for performance as a few pounds were lost. Coil ignition replaced the magneto. For 1964 the bike received stronger front forks, which improved handling. The Smiths Chronometric instruments were replaced by the magnetic type. In 1965 a locating pin for finding TDC was added to allow timing without the use of a dial gauge.

In 1966 the tank badge style changed for the "Harmonica" style to the "Eyebrow". Confusingly the model designators for the US now reverted to TR6R and TR6C. The electrics changed to 12 volt and a bigger 6-pint oil tank added. The front brake drum was redesigned to allow a larger braking surface.TR6C models had a smaller teardrop 2.5 imperial gallons (11 l; 3.0 US gal) tank without the parcel grid.

For 1967 the TR6 received some engine changes. Compression was raised to 9:1. and Bonneville exhaust valve and camshaft were adopted, resulting in a 5 bhp increase. This year was the beginning of the shift to unified threads. The TR6C got twin high pipes on the left side.

The twin leading shoe brake was adopted in 1968.This is often retro fitted to earlier bikes. It provides superb braking and when set up correctly, performs as well as 70s era disc brakes. This year saw the introduction of the  Amal Concentric Carburettor. The TR6R was the "Sport" version with low pipes, and the TR6C was the "Trophy Special" with high pipes and folding footpegs. The TR6C Trophy Special was built at the request of Triumph's sole US distributor at the time, Johnson Motors in southern California, as a way to target the growing number of desert riders. It was fitted with Dunlop Trials Universal block-tread tires and was the model referred to as the "Desert Sled".

The TR6 and TR6R were renamed Tiger for 1969, leaving the TR6C model with the Trophy name. The front brake used a modified actuating lever to avoid snagging of the cable on the front mudguard. Other changes included the larger RM21 alternator and twin Windtone horns. The signature parcel grid was finally dropped for all models.

1970 was the last year before the 'oil in frame' was adopted. The exhausts on the TR6C received the "barbecue grill" heat shields.

In 1971 the TR6R Tiger and TR6C Trophy adopted the P39 frame like the other 650 models. The twin high pipes were retained on the left side. The main improvement over the previous models was the handling, helped by the stronger frame and improved front forks. However, there were many problems with these new models. The oil capacity was reduced causing the engine to run hot and the new 'conical' hub front brake required frequent adjustment to avoid fade. The new electrics proved unreliable. Mid-year changes attempted to correct these problems. For 1972 five-speed was offered as an option thus creating the TR6RV and TR6CV models. The TR6 model ended in 1973 when it was replaced by the 750 cc TR7 model. 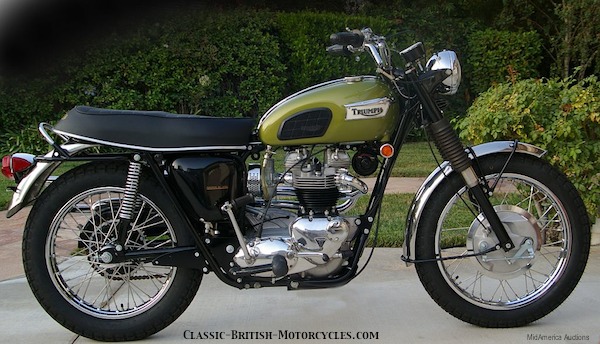 Before using the Trophy, UK police forces successfully deployed Speed Twin and Thunderbird models. The Trophy version, codenamed the TR6P, carried the model name "Saint". These had a special petrol tank which typically accommodated a PYE radio telephone. It had panniers, a fairing or leg shields. These were sold between 1967 and 1973. The factory varied the specification slightly according to the needs of the individual police force.

A rare TR6SS model was produced for the US police. It is not known if these were ever used for police duties. In 1967, Triumph marketed the Saint model to the US public as a replacement for the beloved but discontinued Thunderbird model.

The TR6 also famously makes an appearance in The Great Escape. In that film, McQueen performed many of his own stunts; however, contrary to popular belief, it was not McQueen who jumped his bike over the barbed wire fence in that iconic scene. Because of insurance concerns, Bud Ekins was called in to make the leap. 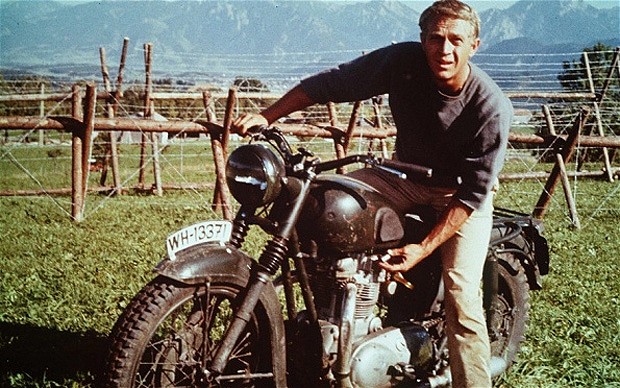