Say the word ‘Scott’ to a vintage motorcyclist and watch his or her response: it will be either that of enthusiasm or loathing. The Scott Motorcycle never has been mediocre! During the 1920’s and 1930’s, when Scott Motorcycles were at their peak, a dedicated throng of enthusiasts ensured these motorcycles gained an almost cult like status: the icons of this cult were the legendary Squirrels, Super Squirrels and Flying Squirrels. 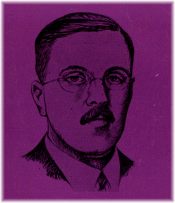 The Scott machine was the product of an engineering genius called Alfred Angas Scott (1874 - 1923). His first motorcycle was built using a homemade twin cylinder engine installed into the steering head of a modified bicycle. He went on to produce a motorcycle which, on paper at least, would not look out of place in a modern motorcycle catalogue: his machine incorporated water cooling, telescopic forks, low slung weight and a lightweight duplex frame giving superb road holding. This was the Scott of 1908 (90 years ago!) and these features were to remain an integral part of the Scott motorcycle for the next 70 years.

The first Scott's were manufactured under contract by a Bradford-based car firm called Jowett. Thereafter production moved to the famous works at Saltaire (Yorkshire) in about 1910. These first Scott's were two-speed models utilising an innovative rocking-pedal foot-operated gear change which also doubled as a type of clutch. The crankshafts comprised a central flywheel with two overhung cranks (rather like the pedals and gear on a bicycle). The water-cooled two-stroke engine featured deflector type pistons to assist the displacement of the spent charge by the incoming mixture of fuel and air. Initially, the twin cylinder head was the only part of the engine to benefit from water-cooling. Later the whole barrel assembly was surrounded by a snug water jacket with the water circulation being entirely due to convection and known as the thermo siphon system.

In fact, so advanced and powerful was the early Scott machine that, as soon as its capabilities were widely known, it instantly became the victim of official discrimination in competitive events (fellow competitors riding their poorly powered four stroke machines were, often, easily beaten by Scott machines of the same capacity). Scott’s were deemed to be overly efficient and therefore their cubic capacity was multiplied by a factor of 1.32 for competitive purposes (this provided the basis for a fortuitous advertising campaign for Scott: what better advert is there than something is so good it has to be banned?).

No motorcycle manufacturer of the period could achieve full publicity until they had competed in the famous Isle of Man Tourist Trophy races. Scott was no exception and they made several appearances at the TT Races between 1910 and 1914. In 1910 a Scott was the first two-stroke motorcycle ever to complete a full TT course under race conditions and in 1911 a machine, ridden by Frank Phillip, gained the TT lap record of of 50.11 mph continuous average speed. This winning streak continued with Scott's being the fastest machines in 1912, 1913 & 1914 as well as winning the event in 1912 & 1913.

The outbreak of the Great War (1914-1918) effectively halted the production of civilian Scott motorcycles. It was around this period that the seeds of change were being sowed by Alfred Scott: in 1919 Scott left the company he had founded so that he could pursue the development of the Scott Sociable (an innovative, half sidecar half car three-wheeled crab-like vehicle). This did not prove to be as successful as the Scott motorcycle but Scott had burnt his bridges and the Scott Motorcycle Company was to continue on without its founder.

With Scott Motorcycles back in production after the Great War a new model, the Squirrel, was introduced in 1922. This was followed by the Super Squirrel in 1925 and the Flying Squirrel in 1926. These were the machines which made the Scott Motorcycle truly famous. These machines evolved from a two-speed clutch/transmission into a three-speed gearbox/conventional clutch driven machine. The frame was modified into a stiffer (and heavier) duplex arrangement leading to a new range of machines known as the Flyers, namely the Tourer, De Luxe and TT Replica. Other variants of the Scott machine were the Kendal Scott and the Reynolds special. Both of these models were built to order by second parties and comprised proprietary modifications to suit the customer.

In the early 1930s the lightweight two-speed model was dropped from the range. This, coupled with that fact that each new season’s model saw an increase in the weight due to contemporary specification additions contributed to an overall reduction in the performance of the machines and a loss of the ‘slim and low weight’ characteristics of the early machines. These changes culminated in the one of the heaviest Shipley models ever: the 1939 Clubman Special which weighed in at over 400lbs but still had a claimed top speed of over 90mph (mostly down to its highly tuned engine).

Around 1934/35 the Scott Three cylinder motorcycle made its debut in the form of a water cooled 750cc in-line machine. This was superseded by the 1000cc version and proved to be another example of innovative engineering by the Scott Company. Unfortunately this motorcycle was never produced in large numbers due to the onset of the Second World War coupled with dwindling business fortunes. Hence these three cylinder machines are rarely seen today.

Shortly after the end of the Second World War (1946/7) Scott relaunched the Flying Squirrel model. Available in 500 or 600cc form the machine was even heavier than its pre-war predecessor due to the addition of massive wheel hubs. The machine was relatively expensive for the performance it offered and this did nothing to enhance sales. The company limped on for a few more years until going into voluntary liquidation in 1950.

All was not lost however: at the end of 1950 the Scott manufacturing rides were bought up by Matt Holder who was to restart Scott motorcycle manufacture in Birmingham. In 1956 the Birmingham Scott was announced, a 596cc model with a duplex frame, telescopic fork front and swinging arm rear suspension. The Scott engine (with modified castings) radiator and the pilgrim oil pump remained as characteristic features of the machine. In 1958, the Scott Swift was announced. The engine was fitted with flat top Pistons giving 500cc displacement and capable of 90 miles an hour. Unfortunately this machine never went into production and Matt Holder reverted to the old style engine. These Birmingham Scott’s remained in production right up to the end of the 1960’s at which time they were still featuring some of the key characteristics of the original models built 60 years earlier.

The 1970’s saw the launch of the George Silk Scott. Originally based around the Birmingham engine, manufacturing rights prevented Silk from building his own copies of the engine so he designed his own. These Silk machines were produced in small numbers right up until 1979 and could trace their blood line right back to the first Scott of 1908. 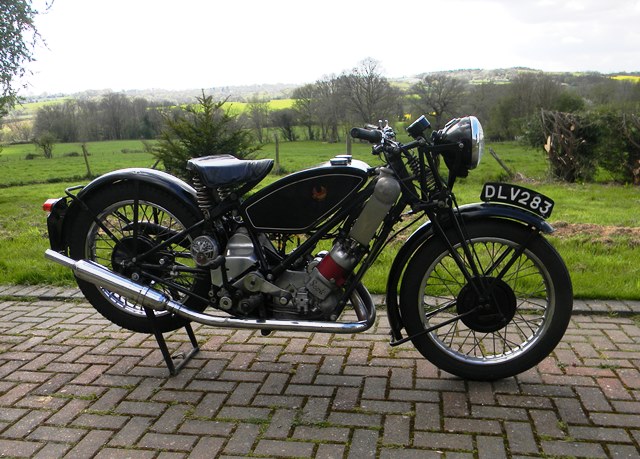 The Scott Flying Squirrel was built by The Scott Motorcycle Company between 1926 and the outbreak of World War II. The Squirrel name had been used for Scott motorcycles since 1921. Launched at the 1926 Earls Court motorcycle show, the Flying Squirrel was expensive - nearly twice the cost of a sporting four-stroke motorcycle at the time. The unique water cooled circulation used a convection method known as the thermosyphon system. The bottom end block was painted either green or red for racing or road respectively and featured a centrally positioned flywheel, twin inboard main bearings, overhung crankpins and doors to enable ease of access to the engine. The redesigned three speed gearbox, multi-plate clutch and the repositioned magneto were all significant improvements and in 1929 Scott achieved third place in the Isle of Man TT and launched a road going TT Replica Flying Squirrel. Following cost cutting the factory also launched a basic touring model in 1929 for under £70 but financial problems continued and in 1931 Scott were unable to enter the TT or the Earls Court show. A three cylinder prototype was developed but Scott's lacked the resources to develop it so on the outbreak of World War II production ended. Between 1935 and 1938 the factory at Shipley in Yorkshire produced the B2592 air-cooled Aero engine and this was based on the Scott Flying Squirrel motorcycle unit. A 25hp version was also specifically developed to power the notoriously dangerous Flying Flea aircraft.