Velocette is the name given to motorcycles made by Veloce Ltd, in Hall Green,Birmingham, England. One of several motorcycle manufacturers in Birmingham, Velocette was a small, family-owned firm, selling far fewer hand-built motorcycles than the mass-produced machines of the giant BSA, Norton or Triumph concerns. Renowned for the quality of its products, the company was "always in the picture" in international motorcycle racing, from the mid-1920s through the 1950s, culminating in two World Championship titles (1949–1950 350 cc) and its legendary and still-unbeaten (for single-cylinder, 500 cc machines) 24 hours at 100 mph (161 km/h) record. Veloce, while small, was a great technical innovator and many of its patented designs are commonplace on motorcycles today, including the positive-stop foot shift andswinging arm rear suspension with hydraulic dampers.

The company was founded byJohn Goodman (born Johannes Gütgemann and later known as John Taylor before formally changing his name to Goodman) and William Gue, as "Taylor, Gue Ltd." in 1905. Its first motorcycle was the Veloce. Later that year, John Taylor set up Veloce Limited, to produce cycles and related products and services. Veloce Ltd initially produced four-stroke motorcycles, first with Belgian 'Kelecom' engines, then an F-head design of their own, with an integral two-speed gearbox. 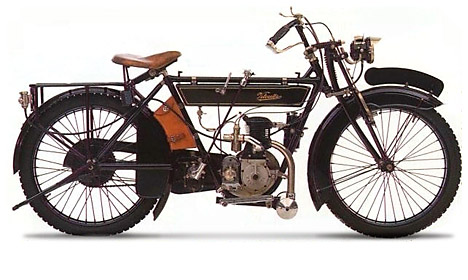 The first two-stroke, built in 1913, was called a Velocette. This name was used for all subsequent models.John was joined in 1916 by his sons Percy and Eugene Goodman.Between 1913 and 1925, Veloce produced expensive, high-quality two-stroke motorcycles of (nominally) 250 cc, which gained an excellent reputation and were entered in competitions such as the Isle of Man TT, with some success. The single-cylinder machines had many advanced features, such as a throttle-controlled oil pump, which set them apart from other manufacturers' products. The factory gradually developed this machine from the "A" series and variants (A, AC2 - coil ignition, two-speed gearbox, AC3 – three-speed gearbox, etc.), then the "H" series, the model U and variants, culminating in the model GTP in 1930, which was produced until 1946. The GTP was a reliable lightweight motorcycle with good steering and power delivery.

In the early 1920s, Veloce realized that in order to grow as a company, it needed a new machine of advanced specification and developed an overhead camshaft (OHC) 350 cc engine, which became known as the 'K' series, introduced in 1925. After a year of teething troubles with this new design, Veloce entered slightly modified 'K' models into racing events such as the Isle of Man TT and Brooklands races, and the reliability and sweet running qualities of their new engine led to a long string of racing successes, and the introduction of a production racing model, the KTT, built between 1928 and 1949. The 1929 KTT was the first production motorcycle to feature positive-stop, foot-actuated gearchange.The roadster models developed from this initial model K were the Velocette KSS (super sports), KTS (touring sports), KTP (twin exhaust ports), KN (normal), and a few variations. A notable change in engine design was introduced in 1935, the 'KSS Mk2' with a fully enclosed aluminium cylinder head. The OHC engine series continued for roadsters until 1948, when the final KSS Mk.2 versions were produced, with rigid frames and Dowty air-sprung telescopic forks. Accurate valve timing was accomplished through the pioneering use of stroboscopic lamps. The 'K' series showed an excellent turn of speed and reliability and soon the factory developed racing models to compete in the Isle of Man TT

In 1933, the company decided to introduce a new line of overhead valve (OHV) machines, in order to cut production costs and make a more affordable motorcycle. The K series was expensive to produce, requiring selective hand assembly of the shaft-and-bevel camshaft drive; it was determined that a simpler OHV design would be quicker to build and require less skilled labour to assemble. The first of these new machines was the MOV, using a 250 cc engine of 'square' dimensions (68 mm bore and 68 mm stroke). It was an immediate sales success, having lively performance for the time (78 mph or 126 km/h), and proved a reliable machine with excellent road manners. From this machine, by lengthening the stroke of the crankshaft, the Velocette MAC 350 cc was introduced in 1934. It proved even more popular than the MOV, and became a real money spinner for the company, bringing much needed capital into the firm. In 1935 an entirely new machine was introduced, based on the two previous OHV models, the Velocette MSS of 500 cc. A new, heavier frame was utilized with the intention that the machine could serve as a sidecar hauler. This new frame was developed from the mkV KTT racing machine, and was shared with the KSS MKII of 1936–1948. The MSS also proved very popular and profitable for Veloce.A 350 cc version of the MOV was the basis for the company's World War II military motorcycles 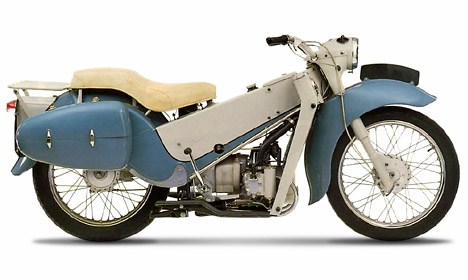 After the Second World War, the company sought to capture what it saw as a developing need for personal transport and created the LE model (for "Little Engine"). This was a 149 cc water-cooled flat-twin with side valves, a pressed steel frame, telescopic forks and a swingarm. Velocette's Director, Eugene Goodman, planned an innovative and radical design that would appeal to a new market that needed cheap, clean and reliable transport. Designer Charles Udall developed the Velocette LE as a "conceived-as-a-whole" design, with engine, gearbox, drive shaft and bevel box in a single unit to do a specific job. It was sophisticated and expensive. Unfortunately it proved less successful than the firm had hoped and, although it became Veloce's best selling model ever, the high tooling costs for this all-new machine were barely recouped.

It did see widespread adoption by British police forces for urban patrol.At the time Officers on foot patrol were required to salute sergeants and inspectors. With the introduction of the Velocette LE this became dangerous, requiring the officer to take his hand off the handle bars, and so the rider was to allowed to show his respect with a smart nod. It has been suggested that this is how Velocette LEs became known as "Noddy Bikes".However,Noddy (the popular cartoon character created by British children's author Enid Blyton) who famously had frequent run-ins with the Policeman Mr. Plod, is also credited with being the origin.

The market for sporting machines was still strong, and Velocette continued to produce the 349 cc MAC for racing .At the 1947 TT, the company won the first four places in the Junior race, and in 1950 they were the 350 cc World Champions

In 1960, Velocette introduced the Viceroy, a very unusual 250 cc opposed twin two-stroke scooter. Unique to the Viceroy was the front mounted twin-cylinder engine, and the fuel tank mounted under the front legshield. The engine itself was extremely compact, and connected to the rear-mounted clutch and transmission by a drive shaft from the engine-mounted flywheel. With electric start, 12-volt electrics, a very low centre of gravity, power over 15 hp (11 kW) and a reported comfortable cruising speed of 65 mph (105 km/h), performance, handling and features of the Viceroy were first class. Unfortunately the scooter came as market forces and rider preferences were changing, and the Viceroy was not a sales success. The late 1960s were the last years of production for Velocette motorcycles, production for the Velocette Viper and Vogue ending in 1968, "Special", Scrambler and Endurance in 1969, and MSS Venom and Velocette Thruxton in 1970. Veloce Ltd. closed in February 1971. 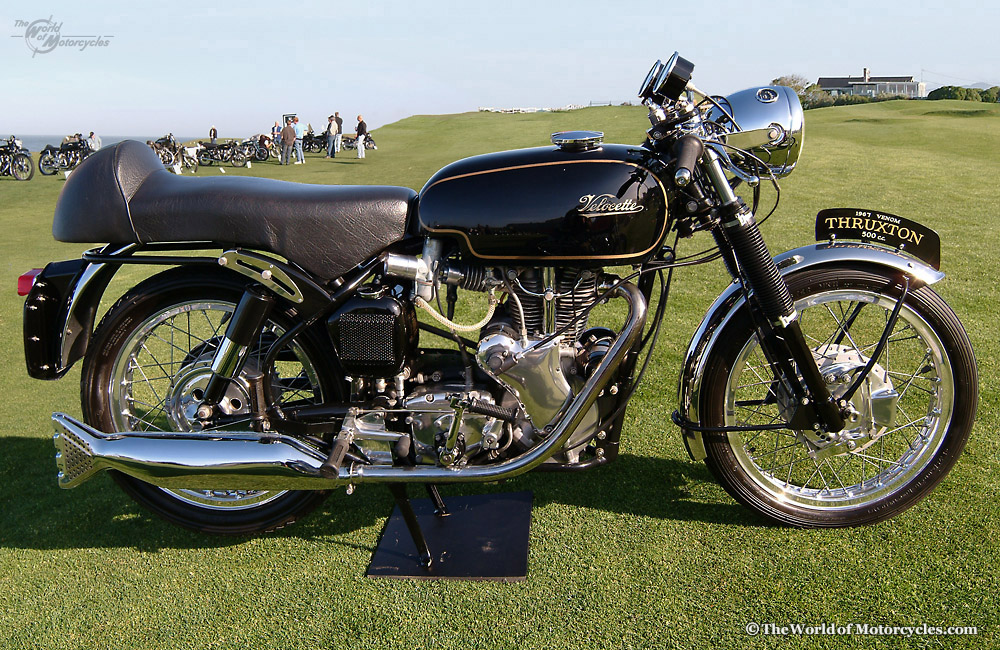 In 1965 the well proven Venom was improved by Velocette designer Bertie Goodman with a special race kit complete with radically revised cylinder head, an Amal Grand Prix carburetor and reworked cam followers. The following year this went into production as theVelocette Thruxton. Also known as the Venom Thruxton, this aimed to fill the gap left by the demise of theBSA Gold Starand was named after the Thruxton Circuit race track on a former wartime airfield in Hampshire.

The Velocette Thruxton was a true racer, with a full race specification cylinder head that was gas flowed by hand to accommodate extra-large valves and a downdraught inlet port. The Amal carburetor was so large it required a distinctive cut away in the bottom of the fuel tank and race cams boosted performance to up to 120 mph. As well as the traditional black with gold lining finish, the Velocette Thruxton was also produced with an unusual blue frame, forks and seat and silver petrol tank with gold lining. In 1968 the Lucas magneto was phased out and Velocette replaced it with coil ignition.

A total of 1108 Thruxtons were built but although it had more power than the Venom the Thruxton couldn't save Velocette and the company was wound up in 1968, with remaining stock sold until mid 1970. The Thruxton has gone on to become one of the most sought after Velocette motorcycles today, however, and many private owners convert standard Venoms to the more valuable Thruxton specification.