The story of Honda actually begins in Yamahigashi, Japan on November 17 1906. On that day Soichiro was born to Gihei and Mika Honda. Gihei was the local blacksmith and Mika was a weaver.

Gihei Honda gave his son an interest in mechanical devices at an early age. Soichiro, as a young child was able to help his father repair farm machinery and build his own toys. He became familiar with gasoline engines by studying the small engine that powered the local rice mill.
Honda began to refine his mechanical skills working on bicycles that his father began selling. By 1922, Honda was ready to work on something more complicated and at the age of 15 he moved to Tokyo and began working in an auto repair shop. 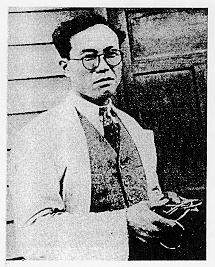 Starting out as an apprentice, Honda developed into a highly skilled mechanic. By the time Honda was 17 years old, he was the trusted mechanic of famous Japanese race car driver Shinichi Sakibahara. This led to a victory at Tsurumi, Japan where the team won the Chairman's Trophy.

Four years after that victory, Honda opened his own auto repair shop in Hamamatsu where he continued to refine his mechanical and engineering skills.

Honda wanted to sell a more powerful motorcycle that led to the 146cc over head valve four-stroke E-Type Dream. This was a motorcycle capable of producing 5 ½ horse power with a top speed of 50mph. The motorcycle featured Honda's own designed frame and suspension on both wheels.
In 1952 Honda began producing the Cub.

It featured a 1/2 horsepower, 50cc, two-stroke engine. Within a year, the little motorcycle was being produced at a rate of 6500 units per month. The steady cash flow from this popular model provided resources to secure the future of the company.
In 1953 Honda began producing a four-stroke single powered motorcycle featuring more engineering sophistication. This small motorcycle was also called a Benly and featured a three-speed gearbox, pressed steel Frame, rear suspension with the engine and swinging arm on a sprung pivot, and telescopic front suspension and produced 3.8bhp. 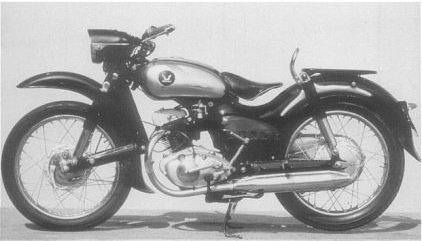 A revolution in the motorcycle industry began in 1958 when Honda brought the C100 Super Club to the American market. It was the first Honda motorcycle sold in the U.S. The small step through design was easy to ride reliable bike. It was featured in the famous “you meet the nicest people on a Honda” marketing campaign that eventually made the C100 motorcycle the best selling motorcycle of all times. Eventually more than 30 million would be built.

Performance and handling improved when the company bolted the little parallel twin engines to a steel tubular frame and added twin carburettors for more power. The motorcycles were known as the CB 72 and 77 super hawk models and gained a reputation of reliability.

With money coming in from sales of the c100, Honda turned their attention to racing. 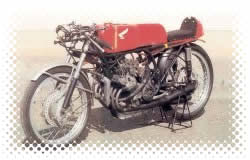 They stunned the world in 1961 with a racing victory at the Isle of Man. Their secret was a 125cc 5 cylinder engine that could rev to 22,000 rpm without coming apart. It was faster than anything in its class.  The financial success of the C100 as well as the racing skills the company learned on the race track allowed Honda to begin designing larger motorcycles with more powerful engines. The first commercially successful large motorcycle from this effort was the CB450, brought out in 1965 and called the black bomber. This innovative engine featured torsion bar valve springs that allowed high rpm and was the first serious effort by Honda to challenge English dominance in the American marketplace.

This was followed in 1969 with the Honda CB750 four. A powerful and reliable motorcycle that dominated the motorcycle market.
The success of the CB 750 4 cylinder Honda led to a series of smaller Honda motorcycles with 350, 400, 550 cc motors and ushered in the era of the universal Japanese motorcycle and spelled the end of British motorcycle dominance in the world. 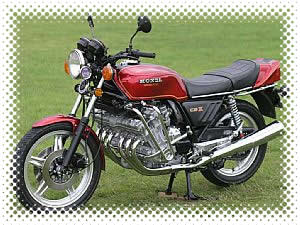 This design would reach its fruition when it morphed into the cult classic inline 6 cylinder CBX in 1978.
The reliability and power of the four cylinder Honda 750 soon led to a new kind of motorcyclist, the long distance touring rider. Craig Vetter designed a full fairing for the motorcycle called a Windjammer. Before long thousands of motorcycle enthusiasts were touring the countryside on their motorcycles behind a Windjammer . 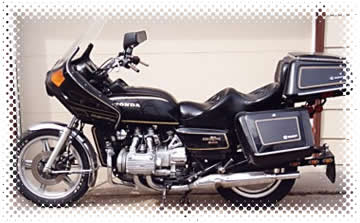 In 1974 Honda brought out the GL1000 Gold Wing. The motorcycle featured a flat four cylinder 999cc a water cooled engine with power delivered through a driveshaft. It proved to be as reliable as the cars of the day. Soon thousands of Goldwings were bought up and converted to touring motorcycles by their new owners.

With interest running so high for touring models, Honda brought out the Interstate model in 1980. This was the first Japanese produced motorcycle to roll off the assembly line as a complete touring motorcycle. The motorcycle featured a full fairing, trunk and saddlebags.

In addition to touring motorcycles, Honda began developing a series of V-four engines in the 1970s. This led to the production of the Honda Sabre and Magna in 1980. These two models led to a whole series of VF designated high performance motorcycles ranging between 400cc and 1000cc. But due to mechanical problems the VF line was unable to sustain itself.

Following the VF was the new VFR series of motorcycles. The VFR 750R was a sport touring motorcycle with lots of power, good balance and reliability.

In 1996 Honda produced the fastest motorcycle in production with the CBR1100XX Super Blackbird (1137cc). The motorcycle became popular with the long range high speed touring crowd.

Today Honda Motorcycle Company is the largest producer of motorcycles in the world.
Soichiro Honda died on August 5, 1991 of liver failure